MENtal Health: Dear MP's, It's Time For A Change! 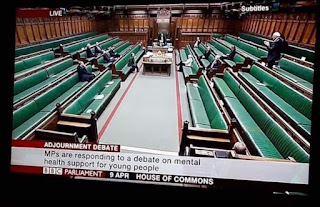 I'm sure many of you have seen the above image, and just like me probably felt the exact same infuriating anguish that this image brings. This is the room that the people in charge, the people influencing and making big decisions for our country, assemble to debate. But wait, there's approximately eleven MP's, ELEVEN MP's who could be bothered to turn up for one of the most crucial and critical discussions that is currently plaguing our country, mental health. In this instance, mental health support for young people.

Our mental health services are stretched, more and more people are reaching out for help than ever before because more and more people are suffering, but we have no proper support to aid them with their recovery. I have personally been a victim of the troubled system that we have in place, waiting months and months for an appointment just to speak with a professional counsellor to help me through our beloved NHS, but I know many who have been waiting a year or two, and are still waiting. Now this isn't the NHS's fault whatsoever, budgets are being cut, services are being stretched beyond limits, but why is that? Why is it that an MP, who can't be bothered to turn up to debate something so crucial, can earn a wage of over £70,000 a year, whist many suffer because of their greed and selfishness. I can imagine the House of Commons would be full to capacity if the debate above was about pay rises for MP's, taxes, or something that would ultimately affect MP's. It's ludicrous to think. I imagine that the eleven that did turn up, have in some way or another been affected by mental health illness, whether it be with themselves personally, or an extended member of their family or a friend. I feel many people only have the will to do something about a particular problem when it has affected them personally. With the shambles of Brexit still ongoing, and many issues up in the air, anything else beyond that seems to have been neglected, but this issue has been neglected far too long.

I feel sorry for GP's, their hands are tied and I know there's probably so much more that they wish they could do without just being able to prescribe antidepressants or refer to a service that takes months to get an appointment. Our MP's, our government are letting our country down when it comes to mental health. It is beyond frustrating to read when MP's are being immediately offered mental health support because of Brexit. I mean, don't get me wrong, a stressful time indeed, but what about the millions and millions of people who are suffering daily from depression, anxiety, bipolar, schizophrenia, stress. Where's OUR support? Where's OUR support from those at the top to actually discuss something so significant that is on the rise and try and fix it. The support is non-existent, and unfortunately it doesn't appear as though things will get better for us.

I feel blessed that I have found some amazing people in the mental health community on social media, and that I've got some good support from certain friends and family, but if this was a physical injury it would be instantly treated with a road to recovery mapped out from the hospital, doctors and nurses. Mental health illnesses are completely complex, that's why there needs to be more investment made from those at the top to give us the support and time that we need. Support physically, emotionally, financially and treated seriously and respectfully.

Now i've been rambling on for a few paragraphs there, but we ALL need to take a stand and fight to have our crippling struggles discussed in the House of Commons by more than just ELEVEN MP's. We have to fight for more mental health support. More investment, more dedication, more time. We have to fight for our younger generation to have better support in place now and in the future. We have to do to better, and I believe that all starts at the top where the big issues are discussed. 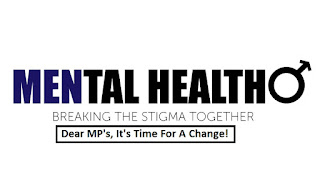 "The reason I write music is to make a connection with people of any age, gender, race, religion. To form bonds. To create common ground. To communicate. Music is therapy. I believe it to be one of the most powerful things in the world." Jazz Morley @JazzMorley, Jan 2019.

The quote above was in response to a tweet I sent to singer/songwriter, Jazz Morley, after listening to her powerful and beautiful song 'Me and My Mind' on repeat. It's a song that I first discovered late last year on Spotify, and I am so glad I found it. The song itself is about a mental health battle, as Jazz describes on her YouTube page "'Me and My Mind' is about struggling with mental health, but being positive that the issues you face don't define you and the way you can sometimes feel won't ever defeat you. Sometimes it feels as though my mind and I are two separate people co-habiting inside one body. The only way to deal with that is to try and maintain as platonic relationship between them as possible, and concentrate on taking each day as it comes." I discovered this song when going through a tough time, not knowing whether I was coming or going, and at very a low point. That night when I first heard it, I connected immediately. I felt strong emotions inside that wanted to break out of my body. I'll admit, I shed a tear the first time I listened to it, as it not only gave me something I could relate to, but also hope. Jazz's voice is stunningly soft throughout, whilst showcasing her array of vocals towards the end of the song. That's the part that really gets me. It's as if you have been on a journey with the song. From beginning to end, the song picks up. The beat behind it and also Jazz's voice. It takes you on a journey which ultimately leads you to a light at the end of the tunnel. As Jazz expresses her array of vocals at the end, it is as if as though she is free of her struggles for a moment, she isn't trapped in her mind and that she can positively express herself. It's an anthem of mine when I am struggling, but also a song that I will listen to for the rest of my life, as it comes with it's positivity and makes me feel something inside that not many songs can do.
When it comes to music, I tend to be drawn to songs that I feel an emotional connection with, and something that I can relate to. My tastes vary from bands such as The 1975 & Haim, to pop artists such as Nina Nesbitt & Taylor Swift, to more upcoming artists such as Betty Who and Yoste. The more personal and relatable, the more I can connect to a song, the more I love it. My Spotify subscription takes an absolute hammering every day, I definitely get my money's worth. Whether it be on the train, in my flat at night, I love to stick my headphones on and get lost in music. For example, Yoste's music at the moment, I can get lost in the magical synth, ambient, relaxing style I haven't really come across before, but it resonates with me so much. I know we all have different tastes, different reasons why we listen to what we listen to, but remember that music is a powerful tool. Music can make you feel things inside that you never thought you could feel. Music can take your emotions on a rollercoaster that nothing else in life can do. Music is magical. Music can help you. Music can heal you. Music can take away the pain.


What song do you have a strong emotional connection with like no other? 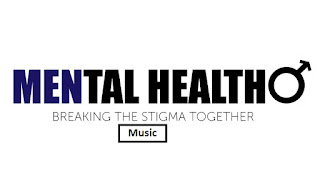 MENtal Health: Dear MP's, It's Time For A Change!

House of Commons, April 9th. I'm sure many of you have seen the above image, and just like...